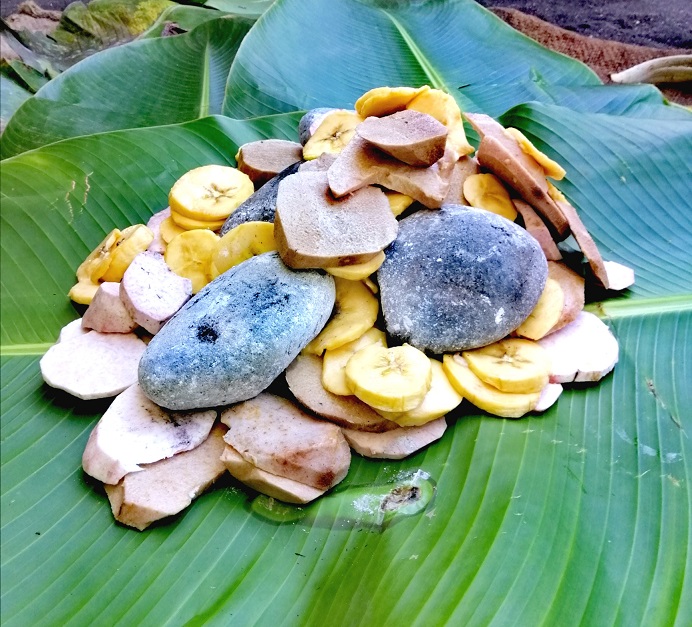 By Konse Vesen from the Santo Sunset Environment Network | Sept 2021

With custom stories, dancing, music, cooking, slow food, agriculture, hunting, handicraft, and tabu histories, the Festival, hosted by Elia community, was the first ever gathering that reaffirms the priority for custom-based sustainable development in an area that is being increasingly targeted by foreign companies and interests for logging, mining and other extractive industries.

In support of local customary governance priorities of chiefs and traditional authorities, more than 400 women, men and youth from 10 villages attended the first ever Western Santo Custom and Conservation Festival, hosted by the Jarai Alo Kolo Council of Chiefs and the Santo Sunset Environment Network.

Chief Puha of Wusi Village told the story of the famous clay pot of Western Santo, called Urowari in local language, and how it is only made in certain seasons of the year, and how its handles represent pigs tusks meaning it is only for cooking and serving the food of high chiefs (normal people would become ill if they ate from this special vessel).

The women of Elia village demonstrated the preparation of local bush salt, called WuiWui, which is actually made from burning special plants from the forest and mixing together their ashes. The women of Wusi village then prepared an incredible meal in clay pots using this salt for all to taste and enjoy.

Dancing and singing from high chiefs of Sauriki community had everyone in awe with the revival of old songs related to custom life in the mountains of Western Santo. The transmission of traditional knowledge across generations is fundamental to protecting and promoting our identities and as well as the sustainability of our livelihoods, resilience to climate change and disasters, and sustaining culturally appropriate economic development.

Festival attendees had great fun playing traditional games, including Juju-uta, making complicated shapes with vines strung between the fingers, as well as throwing vines around sticks, fire-making competitions. A local from Tasmate village won the fire making context, getting a flame in less than 30 seconds! The Area Administrator of West Santo won the bow sharpshooting content, hitting a small papaya on a stick with an arrow shot from 50 meters. After winning the contest, Area Administrator Samuel Kenneth remarked that “this is our identity, this is what makes Western Santo special, this is why we need to protect and preserve knowledge about our unique environment and culture.”

The international community has recognized the close and traditional dependence of many indigenous and local communities on biological resources, notably in the preamble to the UN Convention on Biological Diversity. There is also a broad recognition of the contribution that traditional knowledge can make to both the conservation and the sustainable use of biological diversity.

The Custom and Conservation Festival of Western Santo was also the first Slow Food event in the area. Women and men displayed an incredible diversity of food preparation, preservation and production techniques. For example, Tave, which is a dish prepared by pounding root crops, then mixing and straining with water to make a delicious soup especially formulated for the elderly unable to eat strong foods. Festival participants also sampled Jinjin from Tasmate village, which includes roots grated on the natangura palm frond (uri) and baked to perfection in bamboo segments on hot stones. Another variation of bamboo cooking demonstrated was Kola, which uses small pieces of different vegetables, roots and bush meat.

To eat well in the garden, men from Elia village demonstrated how to prepare Tinsopa, which is a form of cooking while walking! A hot stone is put in the middle of uncooked pieces and wrapped in special leaves and then and carried on your back as you walk several hours to the bush gardens, by the time you arrive, the food is hot and ready to eat! Kina is another special food prepared for women who have just given birth, made of taro leaves cooked in bamboo. With no spices but seawater for flavour, it was deemed delicious by the eager tasters at the festival.

Chief Shem Kalo, President of the Tabwemasana Council of Chiefs and his secretariat were in attendance at the Festival, and commented that “With this Festival, Western Santo is fulfilling our calls to revive and promote customary ways of life. Our future, and the future of our children depends on knowing the value of the environment and doing everything we can to revive the traditional knowledge we have to protect it.”

Santo Sunset Environment Network, the official Environment Arm of the North West and West Coast Are Councils, the only registered NGO based full-time on Western Santo, and is actively working to protect custom, culture and the environment in the Santo Mountain Chain Key Biodiversity Area, which is Vanuatu’s largest and most important site for contributing to the global persistence of biodiversity and meeting globally agreed criteria for the identification of KBAs worldwide. Within this larger biodiversity area, local chiefs are now establishing their own custom-managed and locally owned tabus, protected areas and community conservation areas. This custom Festival was made possible with the generous technical and financial support of the Secretariat of the Convention on Biological Diversity’s Bio-Bridge Initiative, Wrecks to Rainforest Tours, New Zealand’s Pacific Development and Conservation Trust, the Awesome Foundation, Climates Australia, Nia Tero, the Prince Bernard Nature Trust and the IUCN Critical Ecosystem Partnership Fund.

Since the double crises of Cyclone Harold and COVID19, the people of remote Western Santo have been approached by multiple companies seeking to exploit their natural resources in exchange for money, development projects and infrastructure. These offers provide only short term gains with major long-term losses of environment, ecosystem services and climate resilience.

Richard Rojo, vice chairman of the Santo Sunset Environment Network, explains that “we are demonstrating to our people on Western Santo that there are better, more sustainable ways to get school fee money, or the vatu we need to develop our families. This festival is showing how rich we actually are already in culture and custom, and environment that provides for our real needs.”